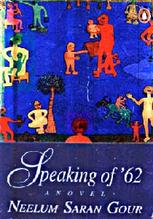 A Delightful Way With Words

This is All India Radio. The news read by Lotika Ratnam. Prime Minister Nehru declared in a joint press conference in New Delhi today that India does not want and dislikes very much a war with China. But that he asserted, is not within India's control... Chinese Premier Chou En - Lai endorsed that the Chinese acceptance of Indian command of NEFA would accompany Nehru's consent to Peking's control of Aksai Chin... ' What's Aksai Chin...'? whispered Lichi loudly, 'Shhhh!' cried five annoyed grown - up voices. 'But what IS it'? shrieked Lichi, petulant. Her gentle, instructive father switches off the new radio set around which eager, expectant neighbours have gathered, and squatting on the broken floor of the room builds up, for his six children, with matchsticks and chalk, the setting of the war of ' 62. It will be sometime, however, before the war actually affects the lives of this happy, ordinary family of eight. For the moment, China means smooth voices announcing exotic names on radio, and lessons from an exceptionally patient father on 'forward polcy' and 'Aksai Chin'.

Speaking of ' 62 is a novel about the Indo - Chinese War of 1962. It is also a story about a year in the life of an archetypal Indian township called Colonelgunj, where no one is excluded from the kinship of affection so that everything, from a festival to a war, is enacted in the lives of the inhabitants with the flamboyance and pride of a personal achievement. The narrator is the eldest of six children - a self - possessed boy of nine. His four younger brothers, Arun, Tul - Tul, Bona, and Montu, and their sister Lichi, together make up the energetic protagonists of the story. Dizzily speeding from query to query every moment of their young lives, Lichi and her brothers see umpteen possibilities of excitement in every 'commonplace' occurrence - from a dispute about a neighbourhood wall to the sound of the wind in the trees. From their precious roof - top perch, below which their father and his friends discuss the impending war, the world for these six children is always something from which dullness has to be peeled off, without much ado, like the skin of a fruit, to get to the real stuff. And the real stuff admits of only two kinds of possibilities - for amusement, for bravado and daring, and possibilities to learn, to quickly hook the multitude of facts at their disposal on to anything even remotely interesting and pull it up through the murk of a mystifying world for scrutiny and acceptance. Initially, the Chinese war too, is seen as offering such dual possibilities. To torment and provoke, as contribution to the war effort, are two tiny pale - faced Chinese classmates, and to discover under the able guidance of their father, the Master Sahib, is the tight - syllabled language, the sweet and sour ambivalence of their northern neighbours. But distinctions gradually blur as the war comes to Colonelgunj via a lone incident of voilence which signals the end to the innocence of six trusting children. One is somewhat reminded of Harper Lee's To Kill a Mocking Bird where too, for Scout and her brother, an understanding of how things 'really' are is accompanied by a loss of wonder, which does not necessarily give way to wisdom.

Gour builds up her story with vignettes of Indian town and family life - swift, colourful episodes which stand equidistant from the larger story of the war, the latter affecting them all in several manifest and hidden ways. This is the story of Verma Sir, with his formidable knowledge of English, to whom the children go on behalf of their father, for a missing word in the crossword puzzle. To put off another contender for the prize to the same puzzle, who comes to Verma with a similar query, he launches into a detailed and delightful account of his experience in a Chinese emporium in London where, torn between patriotic fervour and love for a delicately ethereal porcelain teapot, he decides to buy the teapot, encouraged by the salesgirl's soft affirmation that 'poleeteeks temporary, art permanent'. There is the indefatigable trio of Chandan Babu, Shambhu Nath and Hoo - the three most vociferous commentators on the war, who air three invariably conflicting points of view, though it is Hoo, who 'made it a point to adopt a posture contrary to popular verdict', whose gloomy predictions come true in the end. There is the high - flown Independence Day speech made by the typical Independence Day speech - maker which ends in confusion and rain, and makes an impression on no one but a halfwit who suddenly wants to take on the Chinese. There is Bhagwat Prakash, the local pundit, who searches in the bewildering depths of scriptural wisdom for a parallel to the Chinese aggression and a sign that will spell their ultimate ruin. Speaking of ' 62 teems with such true - to - life, vibrant little stories, rich in colour and detail.

Gour is particularly adept at vivid thumbnail sketches which she has scattered liberally throughout her delightful novel. There are, for intance, descriptions of star - watching and summer storms, kitchen utensils and tea shop interiors, monsoon evenings and winter nights - events and objects never divested of their familiarity but somehow infused with magic and freshness, revealing a very fertile imagination at work. The author gives us realistic portrayals of historical figures like Indira Gandhi and Nehru. Nehru, particularly, seen through the eyes of a rustic yet sensitive Jat, comes alive under Gour's pen. She catches him at a somewhat weary moment in his seventieth year, the hair around the edge of his Gandhi cap thinning , his manner slightly superficial, but his sense of humour and poise intact, as he rummages in the pockets of his sherwani for his wallet, to pay Chander, the Jat, the ten rupees owed to him by the 'Congress bloke' for waving a flag at the 'American Queen' - Jacquelin Kennedy. History has been Imaginatively stitched into fiction in this book - the seams hardly show.

Neelum Saran Gour is a fine writer and Speaking of ' 62 is a novel both children and adults will enjoy. It shows us that the less obvious but more far - reaching effects of war linger on in the mind of a child who, in his first encounter with violence, must decide, albeit unconsciously, who he will be. It is while recalling such a moment of cruelty, when the father of two little Chinese girls is pulled away from his bicycle and brutally assaulted, that our hero declares bravely, sadly .......henceforth I could only pray or, behalf of those who went through humiliation, on whichever side of the border they happened to be.