Back to Bookshelf
The Book Review, April 2002

The Comedy of Life

This book is to a large extent what the blurb promises it to be, a hilarious story about two compulsive storytellers. No, that is not strictly the case, because the book is about more than two storytellers - it includes in its gaze any number of writers and narrators, and is much more than a story, even if the hilarious bit is true. But don't let the "hilarious" tag fool you into not expecting serious intent; most comic creativity addresses the most serious of issues in life. I shouldn't have to say "Chaplin" to make anyone see that.

Virtual Realities is a significant exploration of the way we construct our lives and times, a look at the unacknowledged sources of creativity that feed the way we assign ourselves parts in the drama that we are born into. All of us have felt these creative juices seeping through like lava into our consciousness, into our gossip sessions, into our anger, into our enjoyment. Some of us are even irritated into writing by it even if we hide the fruits of our labour from others. Then there are creative artistes, especially writers, about whom this book mainly is. It is interesting that almost every character in this book has written something for publication or otherwise. If Sravan, the protagonist, is the archetypal successful writer who has fed on people and turned blood into print and politicked his way to prizes and fame, there is his father who has always berated him for entering such a lowly profession. But his father too had had ambitions to write but had supposedly given up the folly to do more useful things in life. Only that he had actually continued to write and secrete away in a locker his stash of refracted life, a stack of novels and plays and poems that Sravan and his friend Buddhoo discover when the father reveals the existence of the loot during a stroke. We all long to leave behind something for posterity, but we also order our lives in various ways - he plays the bullying father in public and the great unsung but to be feted by the future writer in private.

Sravan's mother had been a closet poet till the son in a fit of jealous rage had picked up her precious store of verse and thrown it down a well. He would be repaid for it by his wife, Pragya, who would do something similar to him. But then his wife too is a poet even if she is more open to sharing the poetry with the appreciative Buddhoo than her philandering husband. It is of course the luck of the writer philanderer that his woman of the season, Malini, too should turn her hand to writing and  publish a novel on her own even as she declares her independence from him. What is writing then? An act of therapy? That it may be, as another character, Farooqi, affirms. Or is it simply more primal than that? My reading of the book is that Gour shows how writing is just another manifestation of a primal urge to understand, to order our universe. We choose to play various roles in life and some of us choose to re - order (and recycle) our lives and those of people we know in writing as well. All of us are spinners of yarns, some yarns and some tellers more amusing than others. Buddhoo as the storyteller who only threatens to write but keeps everyone amused with various anecdotes constructs and reconstructs his life at the drop of a hint. He is an obsessive creater, one who needs to make up stories or make things with his hands. His very presence brings people out of themselves, makes them reveal long hidden secrets. He releases the narrators in others out of the closets that they are hidden away in. He is the main character in the book who establishes that there is nothing unnatural or antisocial about creativity.

There are other characters, other secrets, other stories in this book. The not so comic superhero / loving son who mouths the latest obsessions of caste and religion and takes comic book action into real life changes the life of our first couple towards the end of the novel. The failed writer Vyas turns out to be a suprise package of sorts as does Ranjana Devi who is more than a single poem memorial to her dead literary superstar husband. If Sravan seems trapped in his writing, we have to know that the lines that are writ for us are written by us. All stories must end and all endings as endings have to be sad as departures are, but this is then finally an exposition of a comic understanding of life, or to put it differently a book about the comedy of life.

If you have not read Neelum Saran Gour before, it has been your loss. She is one of those writers who gives Indian Writing in English its spine for where will IWE ever get without its Mofussil Writers, its expressions of small town experiences? She has a finely developed comic view of life and writes extremely well. Her first book Grey Pigeon and Other Stories announced the arrival of an exciting talent and her other books have confirmed that suspicion. A much underrated writer, she is a first - rate talent who may not address the expectations of the brat pack that seems to dictate media attention in the metropolis. One more example of the idiocy of the formulation of divide among writers along lines of bhasha vs Indian English. Neelum Saran Gour is a brilliant bhasha writer, the bhasha being Indian English. 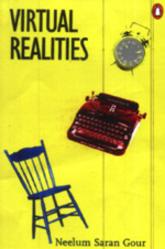